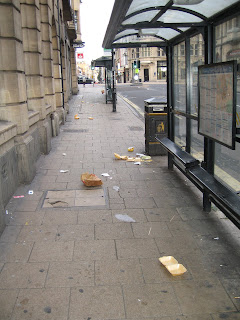 On my walk this morning, I passed a rubbish bin that had dirty food containers sprinkled about. I picked them up and went on my way only to discover as I rounded the street corner that St. Aldates was littered with trash. It was sad to see the result of late Saturday night adventures laying around on the street - especially when rubbish bins are very available. 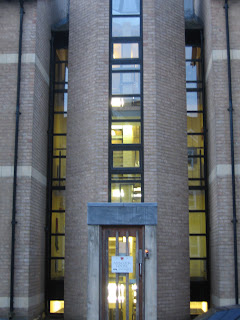 It seems like Oxford has a preponderance of glass enclosed stairways. This one is on Western Road, but I've seen them all over - St. Peter's College has one as well as some office buildings across the Thames.

Posted by Emily at Saturday, September 29, 2007 No comments: 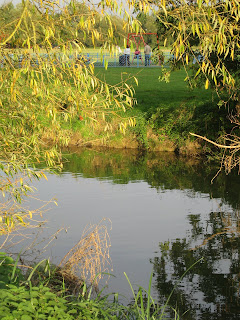 I'm always amazed at how fields, parks, and meadows seem to pop up out of nowhere in Oxford. King George's Playing Field is hidden behind overgrown trees and slightly dingey alley ways. But follow the gravel/dirt road off of Botley Rd. and you run in to this delightful grassy field complete with bridge, walking path, and small play ground.
Posted by Emily at Friday, September 28, 2007 1 comment: 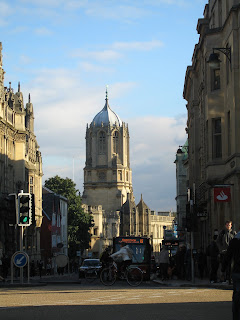 One of the "dreaming spires" that makes Oxford so beautiful.
Posted by Emily at Thursday, September 27, 2007 1 comment: 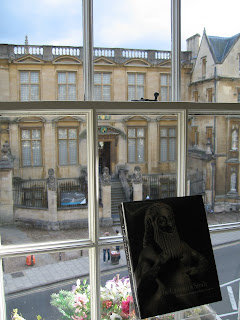 View from Blackwell's Greek and Latin section. This place is truly an institution. I could spend days wandering around. My score for today: A copy of Harry Potter and the Philosopher's Stone.
Posted by Emily at Wednesday, September 26, 2007 1 comment: 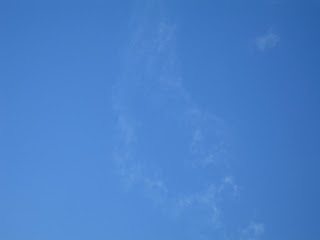 For a California girl, this was a glorious sight after such a nasty morning. 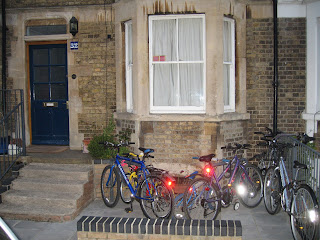 In the U.S. people have taken up putting stickers on the rear windshield of their cars to symbolize the members of their family. In Oxford, you can tell how many people are in the family by how many bikes are in the front yard. 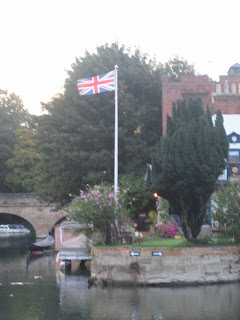 I went for a walk around 6:30 this morning and ended up on the Thames Footpath off of Marlborough. The Union Jack was waving nicely from across the river.
Posted by Emily at Friday, September 21, 2007 No comments: 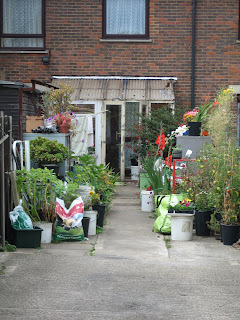 When I think of backyard, I think of green lawn and trees. In our neighborhood near the city centre a backyard is a tiny paved walkway with a few flowers if your lucky. The older couple that lives a few doors down has done wonders for their "backyard."

Posted by Emily at Thursday, September 20, 2007 No comments: 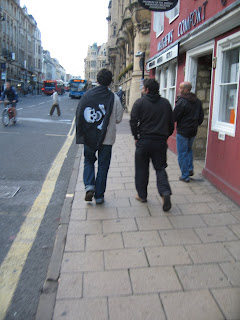 People watching is one of my favorite pastimes. I love airports and metropolitan areas because they are great studies in humanity at large. This guy and his fellow swashbucklers were walking up St. Aldates and I couldn't resist taking a photo.
Posted by Emily at Wednesday, September 19, 2007 No comments: 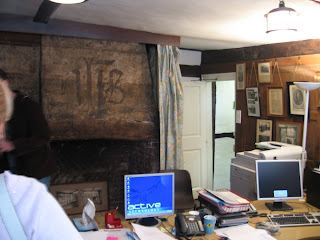 Many literary greats have sprung from Oxford. We think of Carroll, Lewis, and Tolkien, for starters, but we don't often associate Shakespeare with Oxford. In fact, Shakespeare spent a fair amount of time in Oxford. Here was his resting place on his journeys back home to Stratford. Shakespeare stayed at the home of John Davenant. Most people don't realize that the Davenants lived on Cornmarket St. A bright green advertisment that reads "bet tote sport" marks the stairway that will take you into an office building that now occupies the Davenant's house.
The building manager said we couldn't take pictures, so in my quest to be unobtrusive, I had to sacrifice photo quality. What you see is the actual wall of where Shakespeare stayed while in Oxford (and where it is rumored that an illegitimate son was concieved). Curtains and wooden panaling mask the walls normally. The inscription above the fireplace reads IHS - I'm guessing In His Service because our guide said it had protestant significance. (I was mistaken - what a surprise - IHS is a Christogram formed from letters of the name of Jesus. Sometimes read as standing for Jesus, Saviour of Man. Thank's Chee-Seng!) The wall to the left is richly painted in a floral motif.
Posted by Emily at Tuesday, September 18, 2007 3 comments: 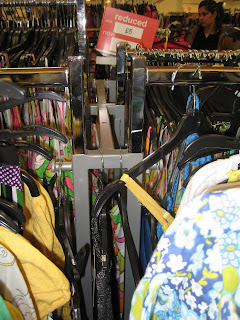 I don't get overwhelmed when shopping that often; that is, until I walked into Primark on a Saturday afternoon - sheer madness! Clothing and people were everywhere in a general disarray. I love to shop and I do love a bargain so I went back today hoping for less crowds. While not seething like this weekend, Primark was still doing a bumping business. Unfortunately that didn't hinder me from spending 30 pounds...
Primark is very similar to Forever 21 in the States - inexpensive trendy clothing, except Primark has a huge reduced area where items become absurdly low priced.
Posted by Emily at Monday, September 17, 2007 2 comments:

The Beginnings of Fall 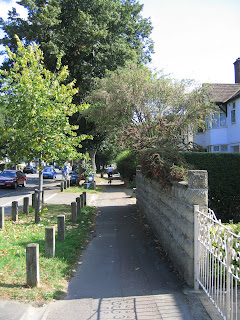 I took the bus to church this morning because I didn't realize Botley Rd. was a walkable thoroughfare (I should have know since people here walk every where). I'm still getting used to the bus system so I opted to walk back to my house from Botley Primary School, where Calvary Chapel Oxford meets. Oxford has been having phenomenal summer weather, but today I could feel the first hints of fall creeping in. What I couldn't capture in this photo of Botley Rd. was the cool breeze, the crunching of fallen leaves, and the sweet smell of autumn.
Also, I'm very excited to be a part of Oxford Daily Photo. I appreciate Percy letting me do this for a few weeks.
Posted by Emily at Sunday, September 16, 2007 2 comments:

Looking Down On To Gloucester Green 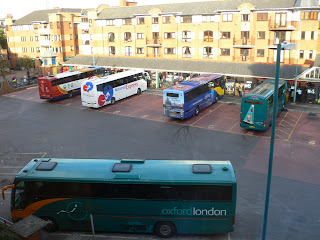 This is a different view of Gloucester Green, which is the main bus station in Oxford. From here you can catch buses to all parts of the UK including the major London Airports which is what I am going to do this afternoon. While I am away you are still going to get a Photo from Oxford, however we are going to get a treat as for the next month the photo's will be taken by a visitor to Oxford from the USA, Emily. I am looking forward to logging on and seeing Oxford thought the eyes of a visitor for the next month and would like to Thank Emily for keeping this alive while I am away, have a look at Emily’s Great Blog!
Posted by Percy at Saturday, September 15, 2007 No comments: 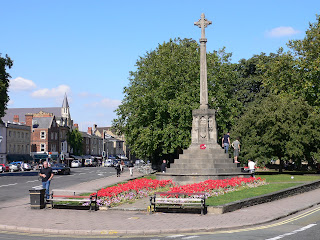 The City Council is doing a great job of ensuring the area's around the city are looking good, and in St Giles the war memorial is always full of colour.
Posted by Percy at Friday, September 14, 2007 2 comments: 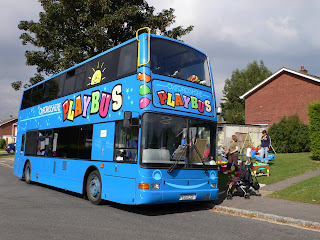 I like this idea, a great big bus full of assorted games and activities for kids that can go anywhere it is needed. It was great day weather wise today and from what I sure that kids were having a great time with all the equipment and games out in the good weather. This bus travels around the shire entertaining kids were ever it stops.
Posted by Percy at Wednesday, September 12, 2007 1 comment: 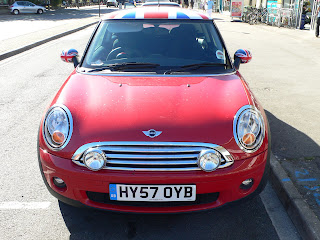 This is the first 57 plate that I have seen, and it was on a nice looking Mini with all the fruit. This plate was issued not to far from Oxford this plate is from Portsmouth Hampshire. Just after see this Mini I spotted a few more 57 plates, so look out for those who have just purchased a new car, I guy at work maybe getting a new one soon.

Have a look at the 07 from March. Not sure why both these firsts are Mini's, maybe it is cause they are built in Oxford
Posted by Percy at Tuesday, September 11, 2007 2 comments: 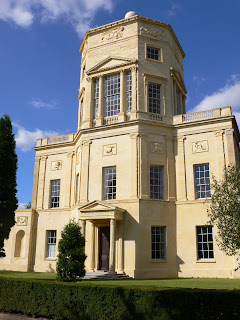 Radcliffe Observatory was founded at Oxford University in 1772. It is known by that name as it was founded by the Radcliffe Trustees, after John Radcliffe
The observatory building commenced to designs by Henry Keene in 1772, based on the Tower of the Winds in Athens, it took 2 years to complete.
Because of the viewing conditions, weather, and urban development at Oxford, the observatory was moved to South Africa in 1939. The building is now used by Green College off the Woodstock Road and forms a centrepiece for the college. The original instruments are located in the Museum of the History of Science in central Oxford.

What is this building facing? It looks like it is on a grand estate?
Posted by Percy at Monday, September 10, 2007 2 comments: 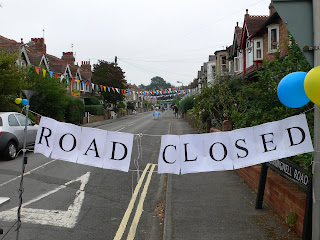 Road Closed due to a Street Party in Sunningwell Road this afternoon, what a great way to build up community spirit and get to know your neighbours a little better, close off the street and have a party!
Posted by Percy at Sunday, September 09, 2007 2 comments: 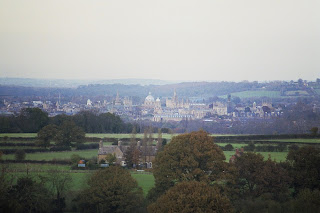 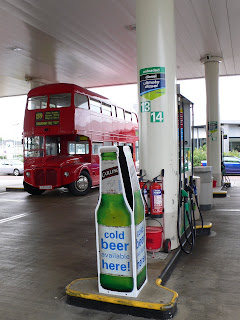 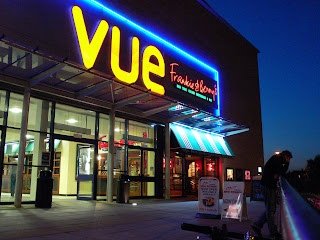 On the outskirts of Oxford next to the home of Oxford United’s Kassam Stadium is the Ozone Leisure Centre. I was at a preview on Monday night and took this photo as the sun was just about disappear. The complex has Oxford newest cinema screens and is more comfortable than the Odeon’s in the city centre, however Odeon in Magdalen Street has more atmosphere. Apart from the cinema they have a ten pin bowling alley and a couple of restaurants to keep you entertained.
Posted by Percy at Tuesday, September 04, 2007 2 comments: 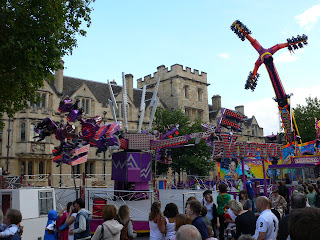 It is that time of the year again when St Giles is closed and the fair moves in to the area. Since the nineteen-century St Giles fairs has been held on the Monday and Tuesday following the first Sunday after St Giles' Day, which is the 1st of September. The lights and sounds of a modern fair contrasts again the buildings of the university colleges in the area and I am hoping to return to get a few night shots later this evening. At lunch time when I was wondering around the price for the more adrenaline pumping riders was £2.50 a go, what will they be this evening?
Posted by Percy at Monday, September 03, 2007 1 comment: 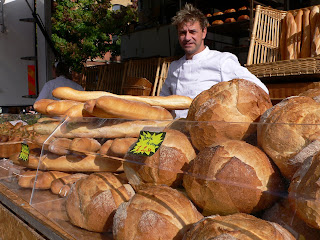 In April this year we had a very nice French Market set up in Broad Street, well today that same market is in Gloucester Green. I like visiting these markets which sell lots of different French foods, this morning I popped out early to get a few freshly baked pain-au-chocolat for breakfast, not sure if they have them for breakfast in France, but I enjoyed them.
Posted by Percy at Sunday, September 02, 2007 No comments: 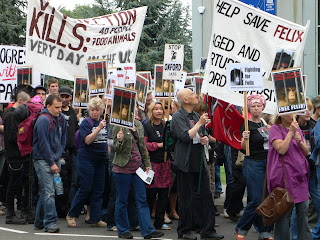 This afternoon in Oxford there was a rally and a protest march from Oxpens Road near the Ice Rink into the city centre and on to the Science area of Oxford University. While out and about this morning I could see a large number of police around the place and this normally means a demonstration of same sort. This photo was taken just as the march started to move off towards the city centre, the protest march was against Oxford University’s enlargement of the Zoology department which carries out animal experimentation, Felix is one of the primates that the university is currently carrying texts on, ironically Felix in Latin is translated to Happy, which the protesters say can not be the case for this animal. See SPEAK for more details
Posted by Percy at Saturday, September 01, 2007 1 comment: