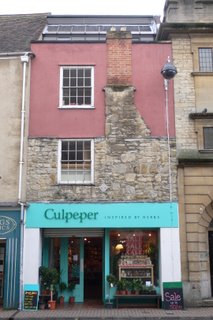 This old store in New Inn Hall Street, central Oxford has very interesting brickwork, you can see the old chimney at the top of the building, not sure when the second floor was added? They now sell herbs in this store. Happy New Year to everyone, and let hope that 2007 is a great of for the Daily Photo community.
Posted by Percy at Sunday, December 31, 2006 1 comment: 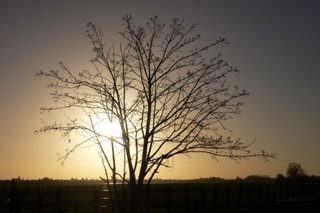 I found myself in Lower Wolvercote this morning just at the sun was rising up over Oxford. What a great start to the day, a sky with no clouds, it did not stay that way for long.
Posted by Percy at Saturday, December 30, 2006 1 comment: 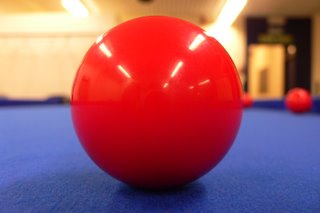 Well, this could be anywhere, but let me tell you it was take in Oxford. Just saw these two guys playing a game of Pool and decided to take a photo of the Red Ball at the end of the game. Not sure what everyone else calls it, but in Oxford the game is called Pool and you have Red and Yellow ball, with on Black ball to be downed last, what do you call it in your part of the world?
Posted by Percy at Friday, December 29, 2006 1 comment: 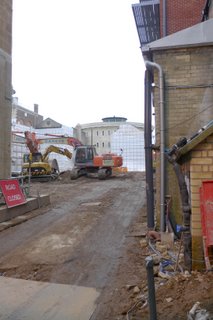 This photo was taken from St Giles looking towards The Slacker Library (The Round Building) behind the Ashmolean Museum. As you can see from the photo the Ashmolean Museum is currently undergoing a £49 million redevelopment. Award-winning architect Rick Mather has designed a new building to replace all but the Grade I listed Cockerell building. His design will double the existing gallery space, and I am not sure in the end you will see the back of the Slacker library as you do in this photo.
Posted by Percy at Thursday, December 28, 2006 1 comment: 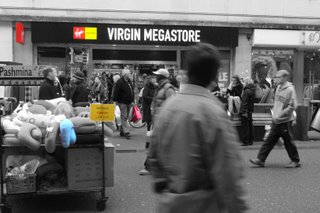 Like every other city in the UK, shopping areas have been very busy since Christmas, with 100's of shoppers looking for bargains. This photo taken in the busy Cornmarket Street with people rsuing back and faward to get the next great deal. Playing around with colour today....
Posted by Percy at Wednesday, December 27, 2006 1 comment: 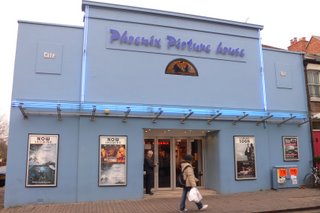 The Phoenix Picture House in Walton Street Oxford would have to be the best Cinema in Oxford. It is small only having two screens however what it lacks in size it makes up in style and programming. The last film I saw there was ‘Deep Water’, Set against the backdrop of the turbulent 1960s, Deep Water is the stunning true story of Donald Crowhurst, a free-thinking electronics inventor who enters the most daring nautical race ever, the very first Sunday Times Golden Globe solo, non-stop, round-the-world yacht race.
Posted by Percy at Tuesday, December 26, 2006 1 comment:

Putting Up The Flag 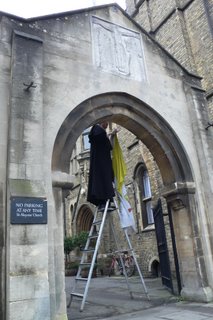 Member of St Aloysius Church in Woodstock Road Oxford uses a ladder to put the Vatican Flag up. The Flag of The Vatican City is raised on all major Christian festivals at the entry to this inner city Church. Merry Christmas from Oxford.
Posted by Percy at Monday, December 25, 2006 3 comments: 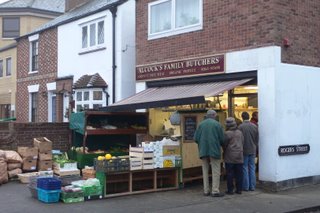 This shot was taken on the 23rd of December in North Oxford, at what would be one of Oxfords better butchers. As you can see the line of customers are queuing out into the early Oxford morning. When you enter this butchers you will see an old photo on the wall taken about 100 years ago, so there has been a butchers on the site for well over 100 years.
Posted by Percy at Sunday, December 24, 2006 1 comment: 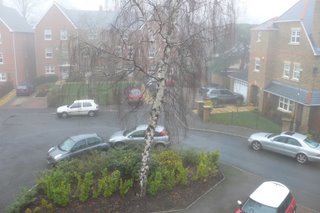 I have been very busy over the last few days and have not had time to post any photos which I am sorry, however I did take a few and would now like to post them in this post.
As you would have heard on the news over the last few days London has had a few days of bad fog, well it was not just London, I think it was all over the South of England. This photo was taken at about 2pm in Oxford. It is looking down on the car park from a block of residential apartments, if you look you can see the new Mini, which is made in Oxford.
Posted by Percy at Sunday, December 24, 2006 No comments: 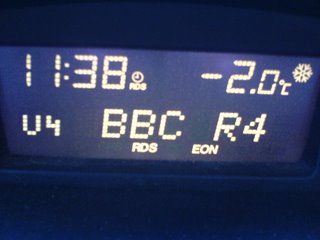 This photo was taken this morning in my van, as you can see at 11:38 it was -2.0c and I was listening to BBC Radio 4. We have been having a cold snap in Oxford over the last few days and it has also been very very foggy. I don't mind the fog, however I know it has been a concern to alot of people trying to get away for the Christmas Holidays.
Posted by Percy at Thursday, December 21, 2006 1 comment:

Looking Back to Oxford 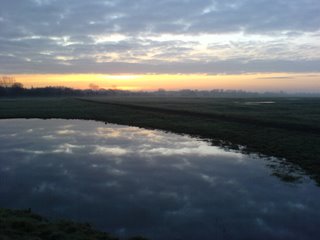 Taken this morning while in Lower Wolvercote, the first light of the morning starting to pop up over Oxford and make its way across Port Meadow to Wolvercote. Very fresh this morning. As you can see there is also a little bit of water around the Meadow as well.
Posted by Percy at Tuesday, December 19, 2006 1 comment:

Late In The Day 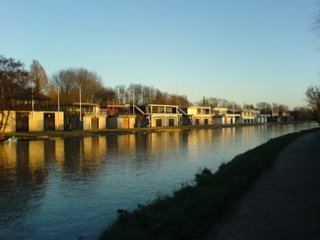 Was riding to work along the River Thames today, late in the afternoon and the colour was just unreal when looking towards the College Boat Sheds, unfortunatly I only had my mobile photo on me, so this photo was taken with the camera in the phone.
Posted by Percy at Sunday, December 17, 2006 1 comment: 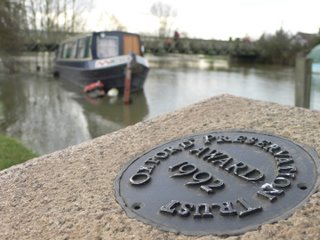 While out and about in Port Meadow, close to the boat yard on Port Meadow, I come across this stone with a very nice Oxford Preservation Trust Award 1992 on top of it. I would think it was for the keeping of the Boat Yard, but it did not say why the award was given. I had a look at the Trusts website, but could not find anything, this will be another one of those things to look up and get back to you on.
Posted by Percy at Friday, December 15, 2006 No comments: 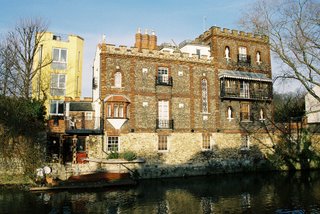 Just over Folly Bridge with the River Thames all around it is a small island, which I am not sure of the name, but on the Island apart from Artist studios and a nice River Side restaurant is Cauldwell's Castle. Now residential apartments this Castle I have read was apart of the Student Riots in 1200’s, this I am not 100% on, but I am going to do a little more research and will post when I find a little more. I just love going past this little Castle in the middle of Oxford, along the Rivers edge, the building it self is one that you must see on a visit to Oxford, and one of Oxfords more unusual buildings.
Posted by Percy at Wednesday, December 13, 2006 5 comments:

Water Water All Over the Place 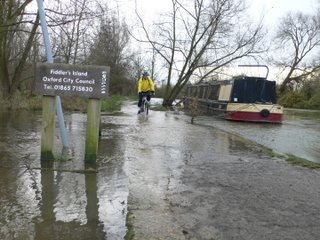 Out for a little cycle today and well, as you can see from the photo, the Thames is high at the moment. In fact Port Meadow in Oxford is underwater. This photo was taken long the Thames Path, a walking path along the length of the River. As you can see parts of it are under water at the moment. The funny thing is that I think we still have a hose pipe ban in place at the moment?
Posted by Percy at Monday, December 11, 2006 3 comments: 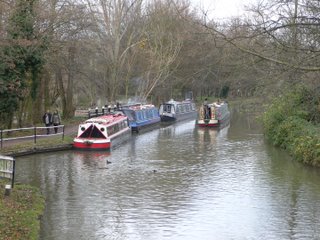 Oxford canal, end or starts right in the centre of the city and along this canal in the summer you will find lots of canal boats with holiday makers on them. During the winter months when locks close for maintenance the activity slows down a little, however there are always the permanent residents at these moorings. This photo was taken from the Iron Bridge next to Isis Lock.
Posted by Percy at Sunday, December 10, 2006 No comments: 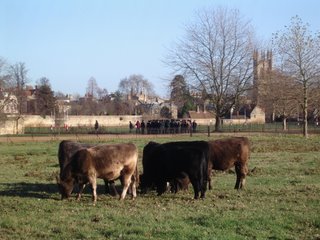 Oxford is always so amazing to me, like today seeing the cattle in Christ Church Meadow, just a few hundred metres from the High Street. Where else but Oxford? Oh, and a group of Japanese tourists in the back ground!
Posted by Percy at Saturday, December 09, 2006 No comments: 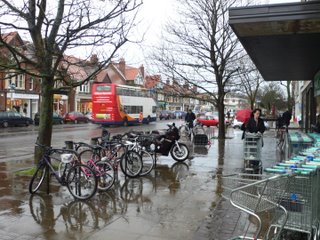 Well wasn’t it a very wet and windy day yesterday? Sorry for not posting yesterday, but I just run right out of time. This photo was taken in Summertown late in the afternoon just as the weather started to turn bad, however it got a lot windier than this at around 6pm. London had a few very bad area’s.
Posted by Percy at Friday, December 08, 2006 No comments: 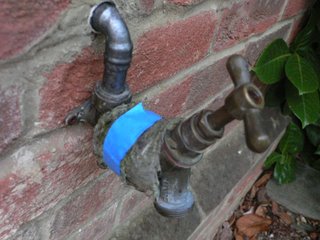 Spotted this tap the other day, it appears to be a little sick ad has a nice bandage with a bright blue band aid which I think is nice. You dont often see alot of outside taps on houses in Oxford, which I think is a must really. How do you water the garden with no tap outside?
Posted by Percy at Wednesday, December 06, 2006 3 comments: 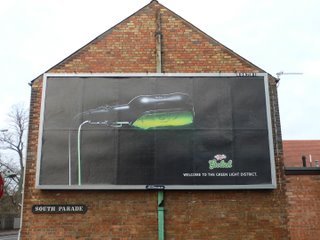 I am not sure why I have taken this photo today, but I do see this billboard must days, not always the same advert on it and think, this is a funny place for a large billboard, on the side of this house, but it must be in the right spot!
Posted by Percy at Tuesday, December 05, 2006 1 comment: 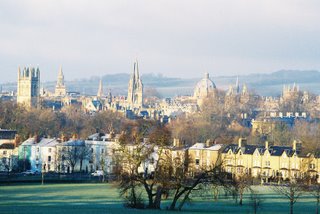 Oxford from South Parks early on a frosty morning. This is a great view of the city centre.
Posted by Percy at Sunday, December 03, 2006 1 comment: 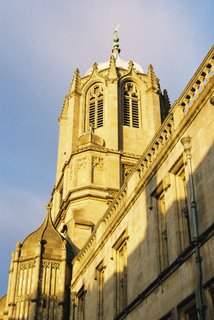 Christopher Wren built Tom Tower, to complete, at last, Wolsey’s gateway. Built in 1681-2, and funded partly by a £1000 gift from the King, Christopher Wren aimed that the tower, ‘..ought to be Gothic to agree with the Founder’s work’, The tower houses great Tom, the recast bell from Oseney Abbey. Weighing seven tons and over 7 feet in diameter, Tom was moved from the cathedral spire to occupy the new tower. Famously, the bell rings 101 times every evening at 9.05 to commemorate the original 100 Students plus the extra one added to the foundation in 1663. The tower gate is the original, and in the fan-vaulted ceiling of the gateway are 48 coats of arms commemorating some of the distinguished college benefactors including Wolsey, Henry VIII, and Charles II.
Posted by Percy at Saturday, December 02, 2006 No comments:

Head Of The River 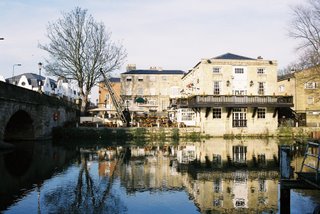 I am sure anyone how has been to Oxord knows exactly where tis great Public House is, right on the River, next to Folly Bridge. I quiet like this shot, I think I am starting to get a little better with this camra thingy. Anyway this pub is very popular in the summer with the outdoor beer garden area right on the River Thames, and it is not far from Carfax.
Posted by Percy at Friday, December 01, 2006 1 comment: