Where's The Front Of The Randolph

What has happened to the ornate front of the Randolph Hotel?  Walking past Oxford premier hotel this afternoon I could not help but notice that something was not right, the classic metal awning was missing and there was this white metal fence out the front.  Not a good look for the guests I am sure, maybe it has gone away for repair?
If you are visiting Oxford and would like a very nice place to have an afternoon tea, the Randolph do a very nice classic afternoon tea.
Few of my other photo's of this classic Oxford landmark are here
Posted by Percy at Sunday, September 30, 2012 2 comments: 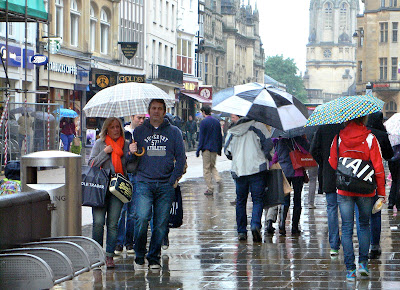 If you were out in Cornmarket like I was this afternoon, an umbrella would have been a wise accessory to have, as the rain was very consistent and heavy at times. Not a good day to be visiting Oxford if you are were tourist, indoor actives today unless you like the rain and getting wet.
Posted by Percy at Sunday, September 23, 2012 3 comments: 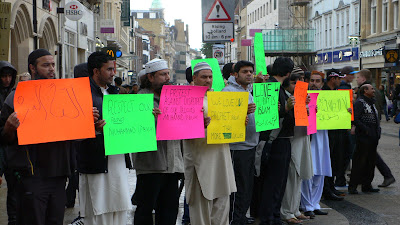 Why can't everyone around the world who is upset about anything protest like this?  This afternoon, at one of Oxford busiest intersections a group of muslim men stood in the rain, in silence holding colourful sheets of cardboard with simple messages of protest.  They made there point of view, without upsetting the whole of the city, without hurting anyone or destroying any property.  These guys need to be congratulated for the manner in which they have made a point.
Posted by Percy at Friday, September 21, 2012 1 comment: 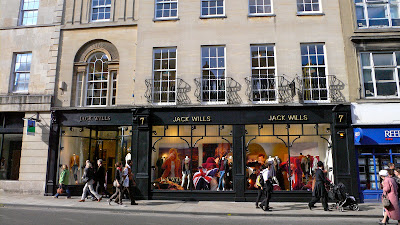 Remember a couple of weeks ago, I posted a shot of the front of 7 High Street covered in pink and blue hoardings? If not click here. There had been a couple of posts suggesting that this space may have been going to be a Tesco or Sainsbury's, but we now know it is a larger Jack Willis Store, which was trading out of a smaller store just across the road.

Click here, to see what the site looked like in February of this year.
Posted by Percy at Thursday, September 20, 2012 No comments: 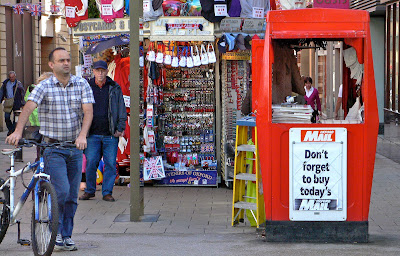 Must have been a very slow news day in the Oxford Mail today, as they did even have a headliner on the stand this morning.  There must be something of interest happening in Oxford.
Posted by Percy at Tuesday, September 18, 2012 4 comments: 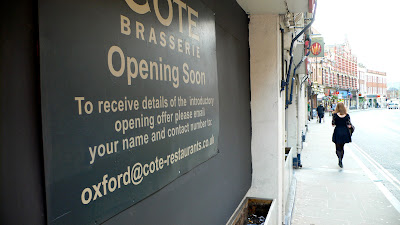 For a number of months the Brasserie next to the Four Candles on George Street has been closed and boarded up.  I have been wondering what was going to move into this space since the Brasserie closed, and this afternoon I noticed a number of signs on the windows saying Cote Brasserie opening soon.  They are also advertising for staff, so if you are interested in working on George Street, this might be the place for you.
It is strange that Cafe Uno that used to be in this space closed unexpectedly, the French Brasserie that followed closed about six months ago, and now we are going to have another Brasserie going in, lets hope that they get the business mix right.
Posted by Percy at Monday, September 17, 2012 1 comment: 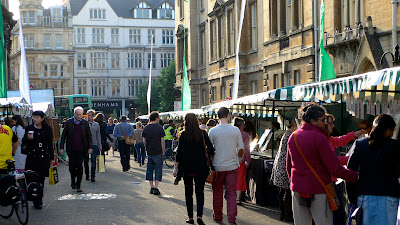 This weekend there was a local craft market in Broad Street, with stalls selling a wide range of hand made craft items.  This area is often used for special one off market weekends, which is very popular with all those who visit, and I am sure the stall holders do well out of the weekend as well.  I don't know who organises these weekends, but they do add to the busy city centre in my opinion.
Posted by Percy at Sunday, September 16, 2012 1 comment: 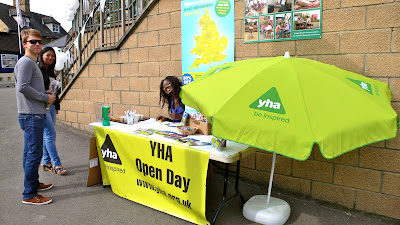 Today was the first National YHA Day, or Youth Hostel Association Day. As a part of this Open Day for the YHA the hostel in Oxford, which is right next to the train station was holding an open day for the hostel, and also giving away free membership to anyone under 26 years old, and those older offering a years membership for just £5.  What a great deal, as I am in the older age group I took advantage of this reduced membership.
Photo taken out the front of the very busy and modern YHA Hostel, when you signed up you also got a very nice YHA cup cake.
Posted by Percy at Saturday, September 15, 2012 2 comments:

Oxford Is Not Just A University 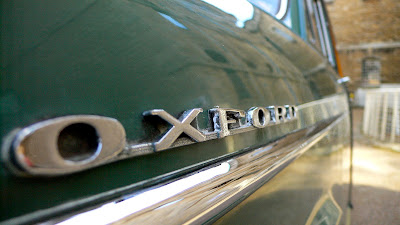 When most people hear the Oxford they would also think or relate the city to the University, however we have had another important industry in Oxford since 1913, and that is the manufacturing of motor cars.
Since this time and up until today Oxford has played a major role in the manufacture of British Motor Cars, with William Morris producing just 400 cars a year before the first world war, and then a few short years later after the war his plant in Cowley was turning out nearly 50000 cars a year.
Today this tradition continues, with Oxford being the home of the BMW Mini.  If you see a Mini anywhere in the world you know it was made in Cowley Oxford.
Posted by Percy at Wednesday, September 12, 2012 1 comment:

You often see things on bikes being moved around Oxford, but I have never seen the base of a bed being walked down Queen Street before.  Lucky this was the style of bed base that could be moved in two halves cause it would have been a little more difficult moving it if it was double the size.  Guess we will be seeing more furniture and household items being moved about the city in the next few weeks, as the students have already started to return to the city to start the new academic year.
Posted by Percy at Tuesday, September 11, 2012 No comments: 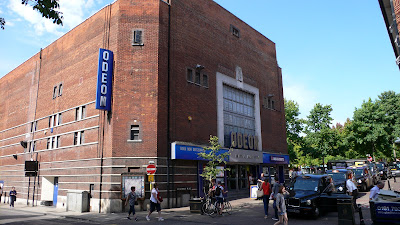 Originally just calledt The Cinema was opened in 1935, in 1947 it become Ritz Cinema, now the Odeon in George Street is Oxford city's main cinema.  It is a little dated compared to the out of town megaplex's that are being built, including out own Vue Cinema complex at the Kassam Stadium.

There was talk that the area including the cinema could be redeveloped to remove that long brick wall that runs along George Street, maybe with a cafe, and have the cinema above, which would be nice I think, not sure?
Posted by Percy at Monday, September 10, 2012 1 comment: 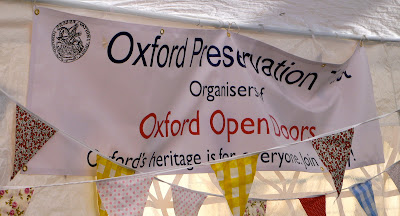 This weekend Oxford Open Doors which is completely free for everyone, is organised by the Oxford Preservation Trust.  I am sure that this weekend must be one of the Trust busiest weekends, and there are things happening all over Oxford this weekend as I part of this great Open Doors Weekend.

Head down to Broad Street to get your free guild to all that is happening this weekend, or better still just visit the website and head straight out to what you want to see, remember many of these places are only open to the public this weekend.
Posted by Percy at Sunday, September 09, 2012 1 comment: 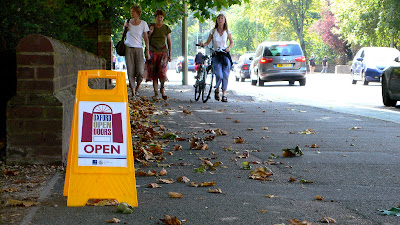 If you visiting Oxford this weekend, you have a unique opportunity access buildings around the city that are not usually open to members of the public, and all this is for free.  This weekend is Open Doors Weekend around Oxford, and it is bigger than than last weekend with more doors open this year than last year.  For the full list of what and when things are open have a look at the Open Doors Website, or if you are wondering around the city, look out for the logo and balloons like the one I spotted outside Keble College Annex on Banbury Road today.
Posted by Percy at Saturday, September 08, 2012 No comments:

All The Fun Of St Giles Fair 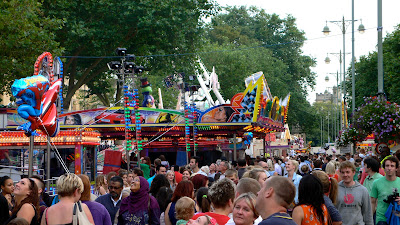 The fair has started for two days in central Oxford, this is our annual fair St Giles Fair, which has it's origin's as far back as 1200. It has been recorded that Queen Elizabeth stayed in Oxford in September 1567 and watched the fair from St John College The fair is held on the first Monday and Tuesday after the first Sunday of September, which is St Giles Day.
Posted by Percy at Monday, September 03, 2012 2 comments:

Why Was There A Crane In Queen Street? 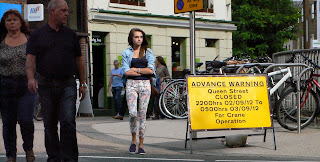 I saw this warning on Friday and could not think of why there would be a crane in Queen Street on Saturday Night Sunday Morning?  Any idea's?  I was not around in the early hours of this morning to see what was happening.
Posted by Percy at Sunday, September 02, 2012 No comments: