The Crazy Shopping Season has Started 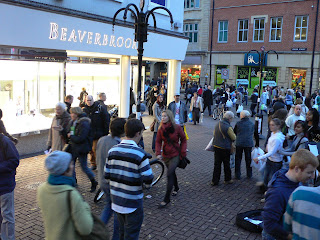 I think the citizens of Oxford have just started to realise that Christmas is not that far away, cause they have come in to the City centre this afternoon in force. I bet the shop keepers in Oxford are happy day as there was a buzz around the shopping streets of Oxford today. Photo taken from Bonn Square looking towards Queen Street. at about 4pm 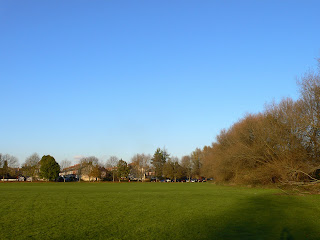 Today was a dry and chilly day in Oxford with not a cloud in the sky all day. This photo of the playing fields behind the Botley Road taken in the afternoon has great colours of the season, the blue blue sky that Emily was trying to take a few days ago against the rusty colours of the trees, and the green grass, love this time of year. 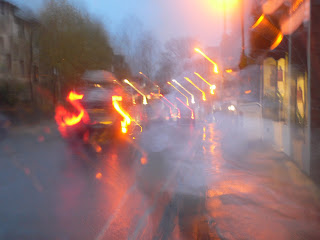 The view from the van window looking down South Parade towards the Woodstock Road. Love the lights from the cars and the rain on the window, the shop on the right is the hairdressers, Cut Above. 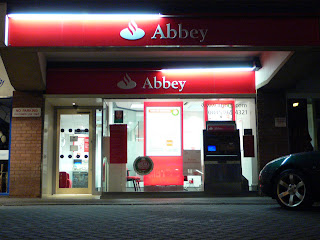 12 hours too late, had this photo been taken at 530am instead of 530pm it may have been of more use to the police as early this morning in Summertown the Abbey Bank was robbed at gun point by four men. Not a lot of information about this is around at the moment, I am sure the Oxford Mail will have a storey in the morning’s paper.

You can not see it in the photo, but a poster in the window is advertising for staff at this branch, not sure if that was up before the robbery or is a more recent advertisement.
Posted by Percy at Tuesday, November 13, 2007 No comments: 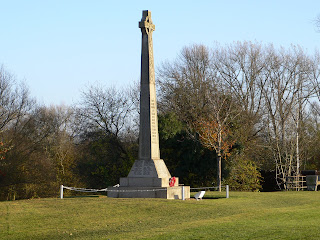 The War Memorial within the Dragon School in North Oxford, standing still and silent, a reminder of those who have given so much so we can enjoy our freedoms today.
Posted by Percy at Monday, November 12, 2007 No comments: 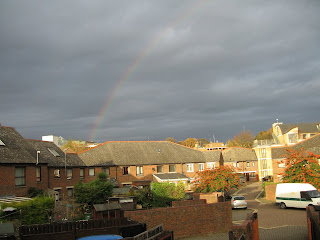 It has been sprinkling on and off all day. My housemate came in to point out this beautiful rainbow. I snapped this hanging outside my window.

Evening on the Thames 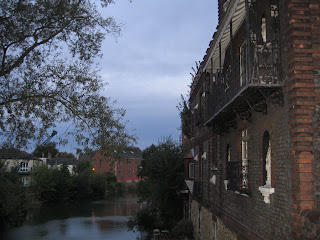 I still haven't quite figured out what this building is, but I really like the mini statues. 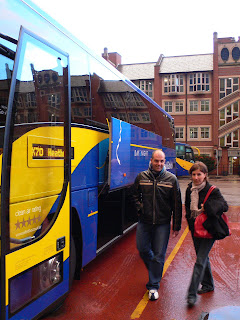 If you are leaving the UK from Heathrow or Gatwick from Oxford the chances are you will be getting on one of these coaches from Gloucester Green Bus Station. Getting on the coach at Gloucester Green can be a mix of emotions, exciting if you are about to leave for holidays or sad if you are saying good bye to an old friend or a relative.

The Airline leaves for Heathrow and Gatwick up to every 20 min in the peak times, which is a great service from Oxford.

See you Sal and Clint. 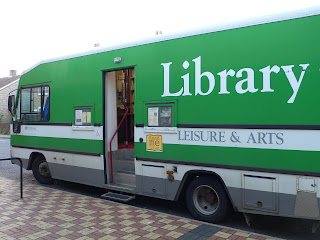 This is going to be a first for Oxford Daily Photo two photo’s on the one day. We it is of same thing, the Mobile Library just one is a photo of the outside and the other is of the inside. These are a great community service provided by the County Council to get books/Video/CD etc out to people who are just that little bit far from the main Public Libraries. I did not know that there are five Mobile Library’s in Oxfordshire, and that the books you get out from the Mobile Library are not due back for four weeks, unlike the main Libraries which is three. 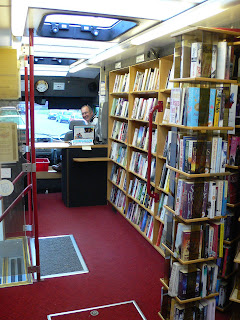 Posted by Percy at Wednesday, November 07, 2007 No comments: 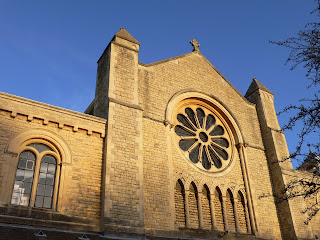 Photo taken this afternoon as the sun was starting to set on St Andrews Church in North Oxford. Again we had a very nice clear day today. 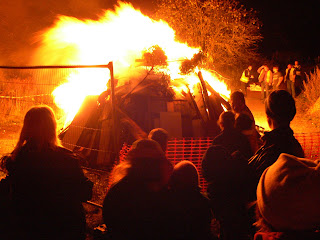 On 5 November each year, people all over the United Kingdom including Wolvercote celebrate the failure of the plot on what is known as Guy Fawkes Night, Bonfire Night, Fireworks Night, Cracker Night.

The Gunpowder Plot of 1605, was a failed attempt by a group of provincial English Catholics to kill King James I of England, his family, and most of the Protestant aristocracy in a single attack by blowing up the Houses of Parliament during the State Opening.

I enjoyed the festivalties this year in Wolvercote with a nice big Bonfire on the green next to the local pub The Plough, who also put on a display of fireworks during the night. Plenty of people about enjoying the cool evening and taking in the atmosphere by enjoying a nice traditional ale or a muled wine. 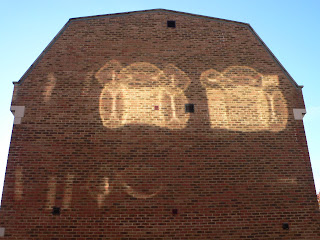 With all the sunny days we are having in Oxford I have been seeing lots of strange images in the form of reflections, this is one of them, the reflection of two windows from a building in Middle Way. Thought these may have been still hanging around from Halloween!!
Posted by Percy at Sunday, November 04, 2007 1 comment: 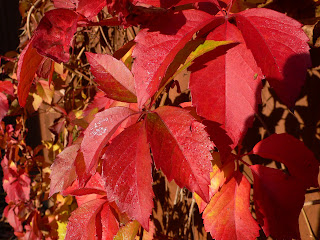 It’s November and the weather so far this month has been great! Nice clear sunny sky’s with the temperatures that are only just of the cool side, and if you are in the sun like these beautiful autumn leaves it is just magic. Lets hope that it stays like this over the next week as well, cause we are heading into firework season and we don’t want it to rain on Monday Night!
Posted by Percy at Saturday, November 03, 2007 No comments: