Editor Of The Oxford Chronicle 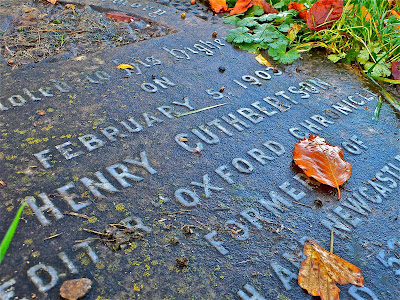 I was wondering around the cemetery of Mill Street on Osney today and was amazed at the number of Commonwealth War Graves in the cemetery, which I didn't know we had Commonwealth War Graves so close to the city centre, I knew that there CWG at the cemetery in in Botley but never knew about the ones in Mill Street. One of the graves that I found interesting was in a state of disrepair, lying on the ground if Mr Henry Cuthertson who died in 1903 and was the editor of the Oxford Chronicle. I am sure that the position of Editor of the Oxford Chronicle would have been well respected in 1903 and it is a shame that a person who had this position with in the local community is now resting in a grave that is not in the condition that you would expect. Very concerning, and a little disappointing.
Found information to say that the Oxford Chronicle was produced on the High Street where Ede and Ravenscroft, England's oldest tailors, are today, at 119 High Street, see here. So I am sure Henry Cuthertson would have been familiar with this building.
Posted by Percy at Monday, November 30, 2009 No comments: 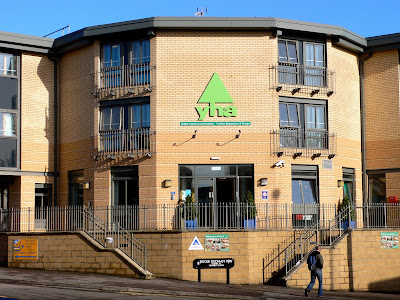 If you are looking for cheap centrally located hostel in Oxford, you can not beat the YHA in Oxford. It is just off the Botley Road, behind the Train Station about a five minute walk from the city centre. This hostel can be a bit sterile, but then I think most YHA are like this now days compared to a few independent ones that I have stayed in, little more knocked around the edges..
Posted by Percy at Saturday, November 28, 2009 No comments: 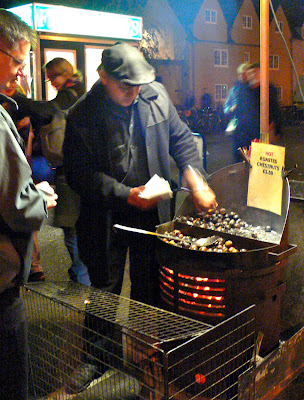 Roasted Chestnuts were very popular at the Winter/Christmas Lights Celebrations in Broad Street tonight. There was lots of activity in the city centre this evening to support this event with many of the city's museums and art galleries staying open later to take part in this event. More events have been planned leading up to Christmas.
Posted by Percy at Friday, November 27, 2009 No comments: 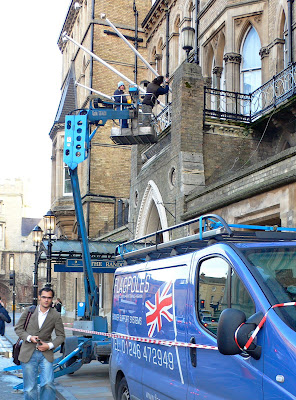 I love flags, and have a nice collection of flags from countries that I have visited. I look out for flags where ever I am, and noticed today that Oxford's premier Hotel, The Randolph Hotel was having it's three flag poles maintained which included a new lick of paint. The hotel normally fly's two Union Flags, with the company flag from these poles, but from time to time you see the country of a visiting dignitary flying from the centre pole.
Posted by Percy at Thursday, November 26, 2009 No comments:

Break In The Weather At Head Of The River 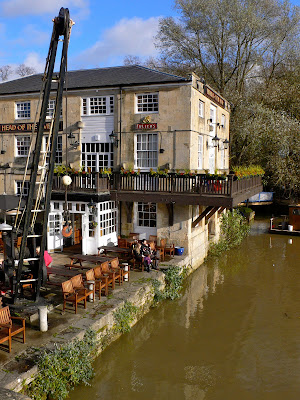 We have been having rubbish weather in Oxford and the UK in general this last couple of weeks, but for about 30 minutes this morning there was a little bit of blue sky, not much, but enough for a photograph of one of Oxford's must see pubs, The Head Of The River. The River Thames is looking muddy!!
Posted by Percy at Tuesday, November 24, 2009 1 comment:

Not sure where you go on a wet rainy Sunday in late November in Oxford, I think I would like to stay warm at home. Noticed these girls having a coffee break in the door way, trying to stay dry from the rain on Beaumont Street next to the Playhouse. They seam happy to be having a cigarette away from work, even if the environment was cold and wet.
Posted by Percy at Sunday, November 22, 2009 No comments: 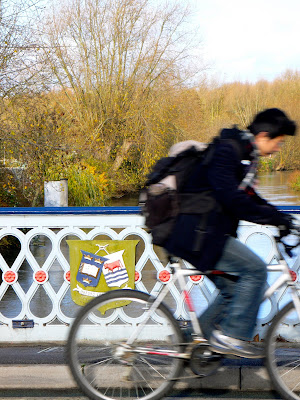 This morning it was very windy in Oxford which made riding your bike just that little bit harder, this guy on the Botley Road had the normal traffic to navigate on top of all that wind. Like the Oxford City and University COA on the Botley Bridge over the Thames.
Posted by Percy at Wednesday, November 18, 2009 2 comments: 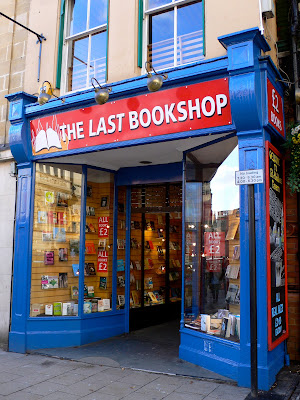 New shop has opened in what was Touchwoods a few years back, it has been empty for a couple of years. Noticed this shop this morning, The Last Bookshop which is selling all it's books for £2 each. Not sure how long it has been open as I don't get down this way that often but it was busy this morning, mainly with browsers I think.
Posted by Percy at Monday, November 16, 2009 2 comments: 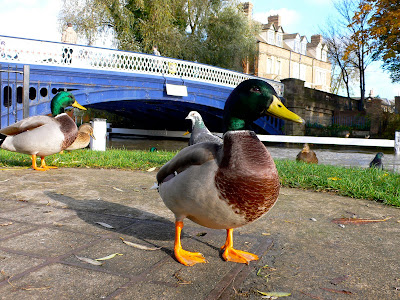 Out for a walk this morning, great day for a walk along the River compared to yesterday, when I spotted this Mallard, who wanted his photo taken. There was a group of Mallards on the bank of the Thames and I wanted to get a photo of a couple, but this one came real close to me, and was happy to have his photo taken. Have a nice Sunday, and get out and enjoy the rest of the day.
Posted by Percy at Sunday, November 15, 2009 No comments: 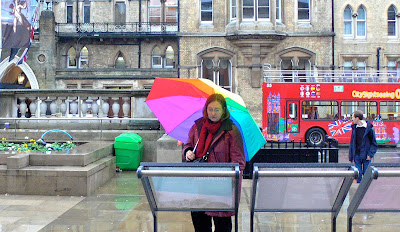 What a horrible start to the weekend? The weather in Oxford has been very windy and rainy all day. If the weather is going to be miserable you might as well have a nice bright happy umbrella to keep it way from you, like this lady visiting the newly reopened Ashmolean Museum.
Posted by Percy at Saturday, November 14, 2009 No comments: 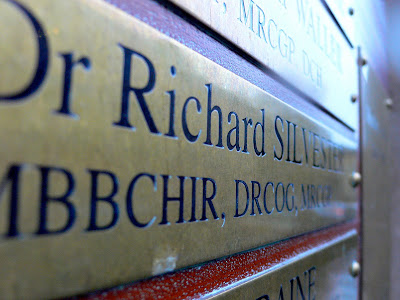 Not the best photo today, but I have only been out of the house for a few hours, and that was manly to visit my Doctor on Beaumont Street. I like the brass nameplates on the entry to professional offices, Dr Silvester's could do with a polish. Think the rest of the weekend will be spent in doors.
Posted by Percy at Friday, November 13, 2009 No comments: 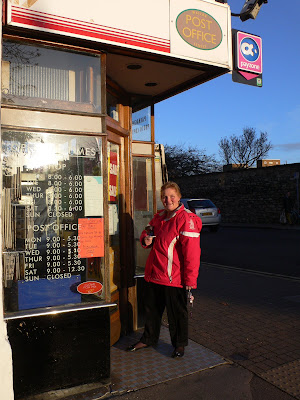 Paula starting another day at Walton Street Stationers but not this is not just another day it is her 22nd year at the store on Walton Street. Paula said that she has seen alot of changes in her 22 years at the store, the biggest being the closing of the Radcliffe Infirmary across the road. This has slowed trade down a little but the with the redevelopment of the site by the university Paula is confident Walton Street will be back to it's busy self. Congratulations Paula on 22 years employment at Walton Street Stationers and Post Office.
Posted by Percy at Wednesday, November 11, 2009 1 comment: 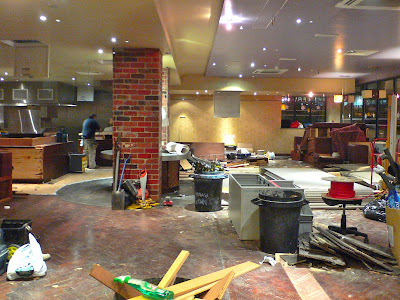 Work has started to gut the inside of the Ha Ha Bar in the city centre. I have just seen a notice on the window to say that WD Weatherspoon's have made application to turn this space into a WD Weatherspoon's named The Swan and Castle? The application is requesting an opening time of 9am and people can make comments to the licensing officer by the start of December.
It has been nearly a year since my post the day after the close of the Ha Ha Bar in January.
Posted by Percy at Tuesday, November 10, 2009 1 comment:

This Lorry On Side At Kennington Roundabout 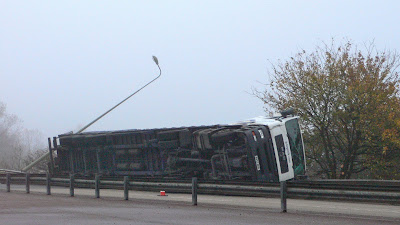 Just after 7am this morning I managed to snap this shot while heading into Oxford at the Kennington Roundabout, I didn't know that it would be still there 11 hours later when I was trying to get out of Oxford. This lorry had car parts on it I heard from the radio reports updating motorist, a few phoned in to say that this accident had added 2 hours to there journeys and the A34 was a mess. How come it takes so long to clear up a mess like this?
Posted by Percy at Monday, November 09, 2009 No comments: 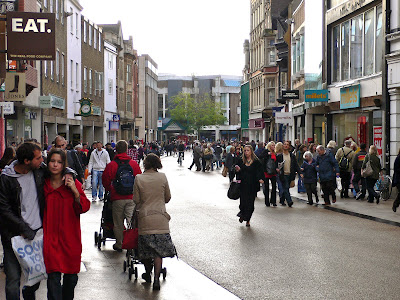 Queen Street has be revamped over the last few months to make it a little more pedestrian friendly, to do this the council has widened and replaced the footpaths each side and removed a couple of the bus stops at the High Street end. I think the traders would be happy with this improvement has it makes navigating this busy street a little easier for everyone. Busy in Queen Street today, even with the country still in recession.
Posted by Percy at Saturday, November 07, 2009 No comments: 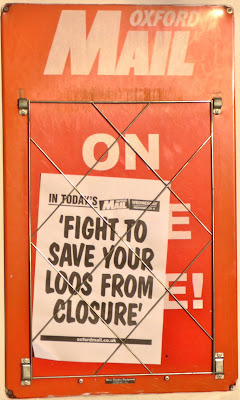 The closure of a number of public loos across the city has hit the Oxford Mail today, and I would have to agree that we need more public loos not less. I spend about half my day out on the roads around Oxford and have used the public toilets on a number of times. If we are to be a tourist friendly city attracting visitors from around the world we should be expanding and updating our loos not reducing or closing them. Tell your councillor you are not happy about this!!
Ironically the plan the council has to compensate for the loss of public toilets is to ask business to open up there facilities to the public, but not the council run library in Queen Street!!
Posted by Percy at Wednesday, November 04, 2009 2 comments: 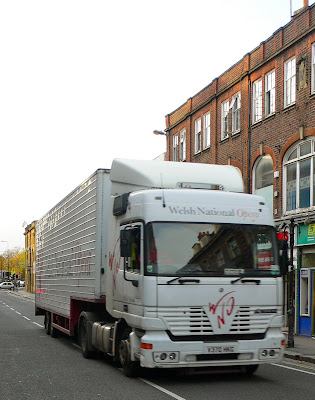 Seen a couple of these trucks heading towards the New Theatre today. The Welsh National Opera must be in town this week, I am not sure how much equipment these guys need but it must be a lot from the number of trailers they travel with. Not really into Opera myself.
Posted by Percy at Monday, November 02, 2009 No comments: