Why Do We Have To Open At Easter? 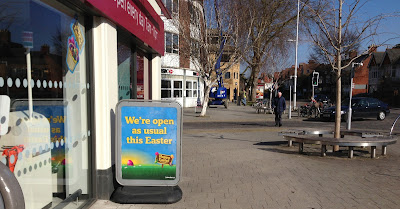 Why do we have to have stores open on Easter?  Is there a need to open 24/7 no matter what the day is? I am just a little disappointed that the majors are open today, well done to the independents and national stores to closed today!

Oh, and congratulations to Oxford for winning the Boat Race today!
Posted by Percy at Sunday, March 31, 2013 No comments: 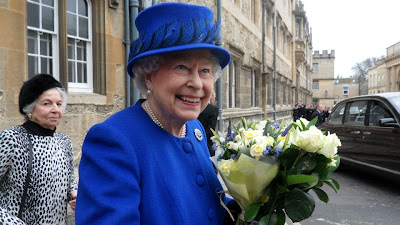 The Queen leaving Oriel College after her lunch at the college.  She had just has presented coins to elderly people who have worked hard for their community at the Royal Maundy Service at Christ Church Cathedral.  The Queen who normally carries no money in her famous handbags handed out two purses one red and one white to 87 men and 87 women as part of the Maundy Service, the white purse had the Maundy money with silver coins adding up the the monarchs age of 87 pence.


The last time a King or Queen attended Maundy Service and money was handed out in Oxford was in 1643 by Charles I. 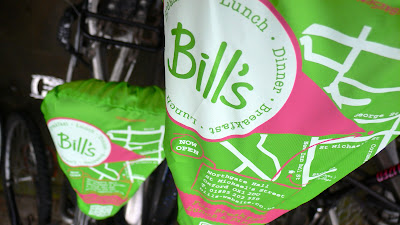 New cafe/restaurant has opened in central Oxford, Bill's. With bikes being the most popular mode of transport around Oxford over recent years putting promotion seat covers on all the bikes parked around the city as become very popular.  Bill's Restaurant which opened today, have jumped on the idea and today every bike in Oxford had a nice bright green Bill's seat cover. My bike unfortunately did not get a seat cover today :(
Posted by Percy at Monday, March 18, 2013 4 comments:

It Is Snowing In March 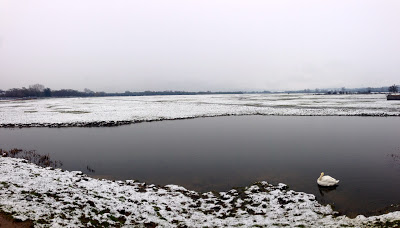 When was the last time it snowed in Oxford in March?  I am not sure however it was a real surprise this morning to have a large snow fall all over Oxford.  As you can see from this photo across Port Meadow looking towards Oxford taken this afternoon hours after the snow stopped, we have a nice covering.  The forecasters did not see this coming, as there was not real warning that snow was on it's way, it has changed the plans of many, as being Sunday many families were out enjoying it.
Posted by Percy at Sunday, March 17, 2013 1 comment: 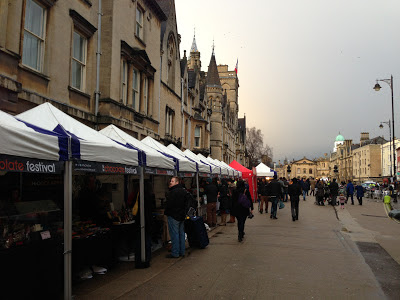 Bit of a bad weekend to have an outdoor market, however that did not stop the Oxford Chocolate Market on Broad Street this weekend.  Stalls set up in this busy pedestrian area of Oxford selling everything you could imagine relating to Chocolate, I even managed to have a couple of free samples, the market will be here all weekend.
Posted by Percy at Saturday, March 16, 2013 1 comment: 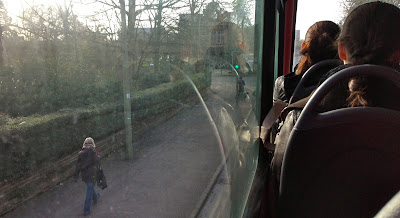 Very cold in the UK and Oxford at the moment so it was nice to see a little bit of Winter Sun while on the bus into Oxford this morning.  I think Spring has been delayed this week.
Posted by Percy at Wednesday, March 13, 2013 No comments:

Life Is A Dream Promotion 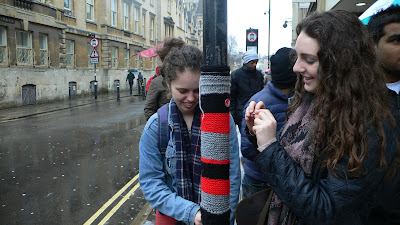 At first I was not sure what these girls were doing, I have seen around the county knitting group have decorated poles and different street furniture around towns.  So when I saw these two tying I knitted patch to a street light, I had to ask what the knitting was for.  I was surprised at the reason behind the knitting, it was a marketing event.  On the knitted patch that was in the street light are badges promoting an Oxford University student play at the Playhouse, Life Is A Dream.  The hope is that passersby will stop and take a badge from pole and enquire about the play.  I have never seen this before, but apparently it has worked in other area’s of the country. In you are interested in Life Is A Dream which is playing at the Oxford Playhouse from Wednesday the 24th of April.
Posted by Percy at Sunday, March 10, 2013 No comments: 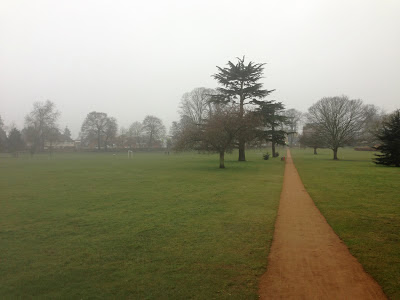 Out for a run this morning in Headington and as you can see from this photo taken in Bury Knowle Park the weather that we had at the beginning of the week has gone. I have not been in this park before and this morning it was empty, apart from one dog walker.
Posted by Percy at Friday, March 08, 2013 1 comment: 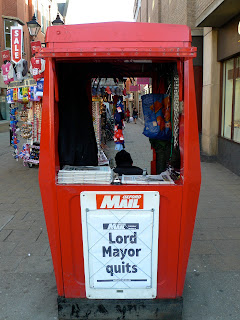 After a number of months of controversy over remarks made my the Lord Mayor, the pressure of public outrage the Mayor Alan Armitage has quit.  This is not before time, and should of happened months ago.
Posted by Percy at Tuesday, March 05, 2013 1 comment: